Another fundamental advancement in the emerging Chinese seaplane market

Victoria, BC, September 20th, 2017: Viking Air Limited of Victoria, BC, Canada is pleased to announce that the Civil Aviation Administration of China (CAAC) has approved the operation of Viking Series 400 Twin Otters equipped with Wipline® 13000 straight and amphibious floats in China.

Certification of the Series 400 Twin Otter on floats is a major milestone in developing the burgeoning seaplane market in China as it provides a proven twin-engine solution capable of profitable 19-passenger commercial operation. Prior to certification of the Series 400, anticipated growth in the Chinese seaplane market has been gradual due to the requirement that commercial operators of single-engine aircraft must limit the number of passengers to 9 and operate with two pilots, making it uneconomical to run a commercial seaplane operation.

"With over 18,000 kilometers of coastline and more than 6000 islands, China presents numerous opportunities for seaplane operations for commercial, private and government support," commented Dominique Spragg, Viking's vice president Strategic Planning and regional sales director for China. "China is a strong emerging market for the Viking Series 400 Twin Otter, and the seaplane segment in particular is expected to expand rapidly over the next 10 years."

Meiya Air of Hainan Province was the first Chinese company to sign on for the Series 400 Twin Otter, ordering five float-equipped aircraft to support their seaplane flightseeing and charter operations in Sanya and the surrounding region of the South China Sea.

Reignwood Aviation Group of Beijing, China, has also made a commercial commitment to purchase up to 50 Viking Twin Otters, with the initial aircraft delivered configured as 19-passenger regional commuters with amphibious floats.

With a commitment to being the world's premier seaplane manufacturer, and to support the rapid growth of the Chinese seaplane market, Viking has invested in the development and certification of the world's first Level "D" full flight simulator with seaplane capability. Located at Viking's Calgary, Alberta facility, the simulator is now fully operational and will commence student training in November 2017. 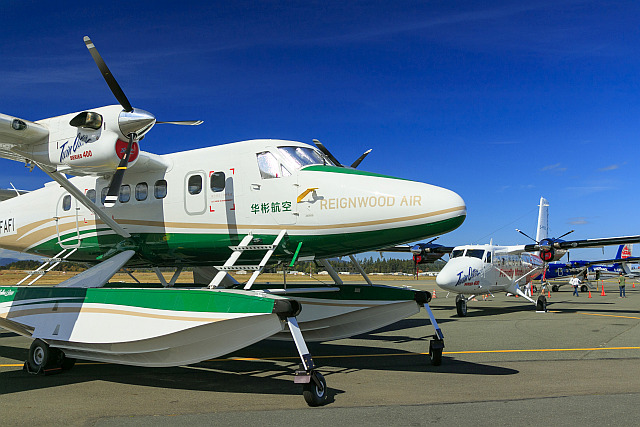 Headquartered in Victoria, BC, Viking is the global leader in utility aircraft services, and the manufacturer of the world-renowned Series 400 Twin Otter. Viking is the Original Type Certificate holder for all out-of-production de Havilland aircraft, DHC-1 through the DHC-7, and provides exclusive spare parts manufacturing and product support for the legacy de Havilland fleet. In 2007 Viking launched the Twin Otter Series 400 production program, and to date over 130 new Viking aircraft have been sold to 29 countries worldwide.

In October 2016, Viking acquired the Type Certificates (manufacturing rights) for the CL-215, CL-215T, CL-415 aircraft and all variants from Bombardier. With the Type Certificate transfer, Viking assumed responsibility for product support for the fleet of 170 water bombers in operation worldwide.

Viking is managed by Longview Aviation Capital and forms part of the portfolio of a prominent Canadian family investment firm that maintains a long-term investment horizon and is one of the leading investors in the Canadian aviation industry.

Airbus A220 / CSeries wings are made at Spirit AeroSystems, a facilty that Bombardier used to own in Belfast, UK

The three-year deal to build a prototype model will help support 100 jobs at the Belfast aero-structures factory taken over by Wichita, Kansas-based Spirit in October, the Ministry of Defence said Monday.

Britain is seeking to develop so-called "loyal wingman" drones by the end of the decade to serve alongside its Eurofighter Typhoon and Lockheed Martin F-35...

A220 & E2 Family Demand Likely To Stay Depressed After COVID

As passenger travel trickles back to life, one trend that's already apparent is a long-term diminution of airline yields in most regions.

This is largely driven by a reduction in business travel, some of which is likely to never return.

Regional jets and small single-aisles like the Airbus A220 and Embraer's E2 family have higher unit cost, or cost per available seat-mile (CASM), than larger aircraft like the Boeing 737 or Airbus A320.

Achieving an operating profit with smaller jets requires high unit revenue, or revenue per available seat-mile (RASM). This will be difficult to achieve in a world where business travel is still down 70%-80% this year, even with a vaccine – and may be down 30% or more permanently.

What role will these smaller jets have after the pandemic? And will production match this new reality? A closer look is required.

Officials say the pair chartered a small plane to Beaver Creek, Yukon, where they were able to get the Moderna vaccine at a mobile clinic by saying they were local workers.

VANCOUVER -- A Vancouver couple is being accused of jumping the queue for the COVID-19 vaccine after they travelled to Yukon to get vaccinated.

Officials say the pair chartered a small plane to Beaver Creek, Yukon, where they were able to get the Moderna vaccine at a mobile clinic by saying they were local workers.

Streicker said the man and woman filled out self-isolation declarations upon arriving in the territory, but...

No Rapid Test Obligation For Crew And Travelers Flying To Netherlands From 9 Countries...

January 22, 2021 - by Association of Dutch Cabin Crew VNC for www.vnconline.nl

For crew and travelers from the Netherlands Antilles and 9 'safe' countries, there will be an exemption from the rapid test requirement before departure to the Netherlands.

These are the countries for which no PCR test is required.

January 22, 2021 - by Dominic Gates for www.seattletimes.com

American attorneys for Ethiopian Airlines, which lost 157 passengers and crew in the second fatal crash of a Boeing 737 MAX in early 2019, have advised the carrier not to accept a settlement Boeing has offered but instead to sue the manufacturer for punitive damages in the U.S.

In an urgently worded letter sent Sunday, the Chicago-based attorneys warned Ethiopian CEO Tewolde GebreMariam that the offer falls "grossly short" of what the airline could win before a U.S. jury — particularly since Boeing recently accepted responsibility for criminal fraud during the plane's certification by regulators.

The settlement Boeing has offered is "a mere fraction" of the actual damage, the lawyers told Tewolde, and accepting it "will inevitably leave substantial money on the table and would be a tremendous political and financial mistake for Ethiopian Airlines."

Yet like many airlines, Ethiopian is now desperate for cash.

January 21, 2021 - by Joanna Bailey for www.simpleflying.com

(FLIEGERFAUST NOTE: This is the city of Mirabel in Quebec, not Montreal as mentioned in this article. The airport is YMX, not YUL.)

Air Austral's very first Airbus A220 has been spotted outside the paintshop with its paintwork all complete. Along with a beautifully adorned body and azure blue engine surrounds, the aircraft's tail is something very special. Air Austral plans to launch its first flights with the aircraft in late February.

Air Austral's first Airbus A220 has rolled out of the paintshop in Montreal this week with a gleaming coat of fresh paint. The aircraft is, as most are, mainly white, but with a beautifully applied Air Austral logo, complemented by a blue engine surround.

But the real eye-catcher here is that stunning tail.,

From Your Site Articles
Related Articles Around the Web
Videos
Videos Aviation - General
Fliegerfaust
www.youtube.com
BOEING 777 TAKE OFF FROM COSTA RICA IN 4K

BOEING 777 TAKE OFF FROM COSTA RICA IN 4K

A strange phenomenon was observed at Paris Roissy-Charles de Gaulle Airport. 49 Chinese passengers, in transit to Shanghai, were tested positive for the coronavirus this Sunday.

They are currently isolated in a hotel, but these concordant tests lead to questions as these passengers did not come from the same country and were simply waiting for a joint connection to reach China.

17 of them came from Lima, Peru, and had arrived in Paris on an Air France flight. The others came straight from Bogota (Colombia), Istanbul (Turkey), Panama and Mauritius.

Antonov To Resume Production Of An-74 “Cheburashka” Cargo Plane?

January 20, 2021 - by CLEMENT CHARPENTREAU for www.aerotime.aero

The production of the Antonov-74 transport aircraft could resume in order to supply Ukraine's armed forces, the country's government announced on January 16, 2021.

The Antonov An-74 made its first flight in 1979. It initially had the designation An-72A "Arctic", as it was an upgrade of the An-72 test aircraft for use in the Arctic and Antarctica regions, thanks to the addition of reinforced landing gears. It is capable of flying 4,600 km at a speed of 560 km per hour.

The aircraft is built around the so-called Coandā effect by mounting the turbofans on the top of the wings to provide high-speed air even at low flying speeds. Boeing's experimental YC-14 used the same principle.

The peculiar position of...

A220 & E2 Family Demand Likely To Stay Depressed After COVID

No Rapid Test Obligation For Crew And Travelers Flying To Netherlands From 9 Countries...

Antonov To Resume Production Of An-74 “Cheburashka” Cargo Plane?

Inside the game-changing $72million private jet from Bombardier: Global 7500 can fly from New York to Hong Kong non-stop - and its interior can be customised to include a double bed

JetBlue Taking Delivery Of First A220-300 / CSeries Made In USA

Now Boeing Wants To Be Loved By Canadians! - Remember The Bombardier CSeries? - Must Read...

UPDATED: Tomorrow, First Delivery Of Airbus A220 Made In USA

NEWS: Air Canada Might Have To Cancel Airbus A220 (CSeries) Order...

A First for Mobile Alabama... First Airworthiness Certificate To Made In USA (CSeries) Airbus A220

NEWS: Airbus Has Ordered Bombardier to STOP All Work Related To The A320neo Nacelle - Move Work To China - Mexico

Expecting You To Be Stupid The Media Are So Insane- About What?

Exclusive: Inside The Bombardier Belfast Factory After The Fire

Some News About Mobile, Alabama - Airbus A220

Astrid Stuckelberger:   Understanding The Management Of The Pandemic 27/12/20

US Navy To Field C-130J-30 In Nuclear Communications Role

Which Airlines Operate Both Versions Of The Airbus A220/CSeries?

The Insider - What's Going To Happen at Bombardier - A Must Read...

Boeing Officially(ish) Rebrands The 737 MAX - Marketing Did Not Work Too Hard...

A380 Emirates plane in 'Near Miss' mid-air Collision with Airbus A330 - It could happen to you too!

Did you know? A New Microsoft Flight Simulator is Coming... What I Have To Say...